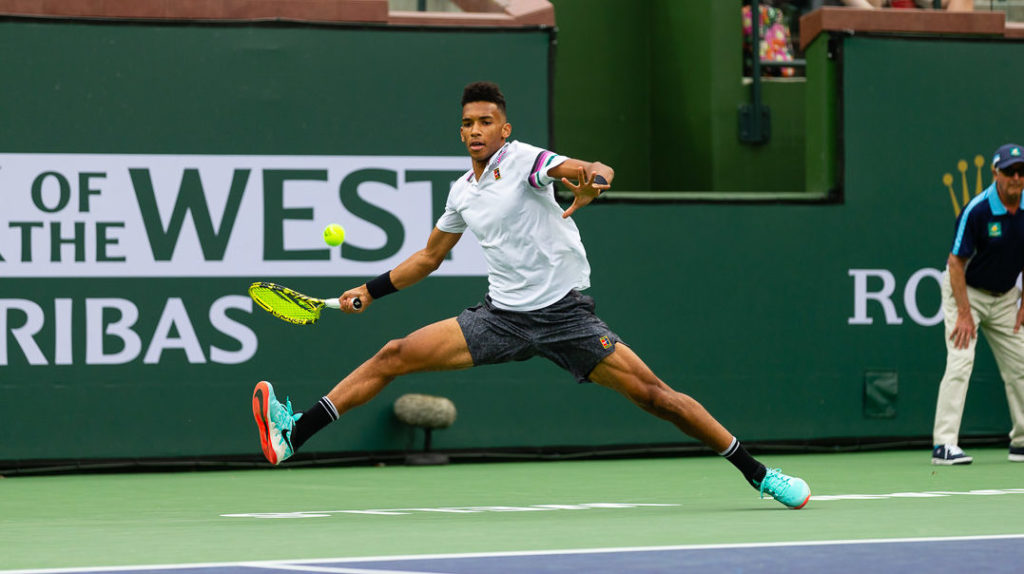 Milos Raonic and Félix Auger-Aliassime found themselves in perilous predicaments during their third-round matches at the BNP Paribas Open on Monday.

Both trailed 1-4 (1-5 in the case of Auger-Aliassime) in the final set and staged impressive comebacks. But only Raonic was able to pull out a win – overcoming an inspired performance by qualifier Marcos Giron 4-6, 6-4, 6-4.

Aliassime was two points from victory when he charged back from 1-5 to lead 5-3 in the final set tiebreak. But gritty, tenacious Yoshihito Nishioka held firm and finally prevailed 6-7(2), 6-4, 7-6(5).

But that’s not to say there wasn’t excitement as the lowly-ranked Giron, No. 217 – he needed a wild card to get in the qualifying – played inspired tennis to trouble an unsettled Raonic who was unable to break down the 5-foot-11 American until the final stages of the third set. It was only when the 25-year-old Giron wavered late and Raonic scored consecutive breaks of serve at 2-4 and 4-4 that he was able to impose himself and finish off the one-hour and 56-minute match.

“It’s my second time playing a top-20 in the world and so I think it just shows his experience,” Giron said about Raonic. “He kept fighting and putting balls in the court and I made a few mistakes. But I think he showed why he’s one of the best players.”

“He came up with the goods,” Raonic said. “And definitely pushed me sort of to the brink where I was getting a little bit frustrated. I just kept with the understanding of he hasn’t been in this scenario before and make him play in a few more of the situations.”

The match conditions featured cool temperatures and overcast skies and that may not have favoured Raonic. “He has a bit of an eastern grip on his forehand,” Raonic explained about Giron. “I tried to get it high on the forehand. The ball didn’t come up as much as I would have liked. Even if it’s cold, with the sun out, the court heats up a bit but obviously that wasn’t the case today.”

It was a psychological struggle for Raonic against an opponent who was red-lining a game that so far has only taken him as high as a No. 207 ATP ranking last month.

“Giron played a really good match,” said Raonic’s new coach Fabrice Santoro. “Personally, I didn’t expect him to play at that level. It’s very tough to play against someone that has four wins (two in qualifying) and who’s playing Milos on a big court with nothing to lose. And he took risks and if they worked they worked, and if he misses he misses. So he played a really good match. And Milos created chances (3/12 on break points) but he couldn’t take advantage of them.

Raonic had 55 winners (including 22 aces) to 24 winners (three aces) for the plucky Giron.

Next for the No. 13-seeded Raonic will be No. 55-ranked Jan-Lennard Struff. The 28-year-old German is the last player to beat Raonic – scoring a 6-4, 5-7, 6-4 win just two weeks ago in the first round in Dubai. In that match Raonic famously missed an overhead into the net from close range. In their only other meeting, he had a straight-sets victory over Struff in the first round of Wimbledon in 2017.

As much as Canadians were cheering for fellow countrymen in Raonic and Auger-Aliassime, there had to be some sympathy for their opponents in Monday’s third-round action. Giron had (labrum) surgery on both his hips in December 2015, and then February 2016, and Nishioka tore his left anterior cruciate knee ligament in Miami almost two years ago and had to miss the rest of the 2017 season.

The 23-year-old Japanese is a quick and an amazing retriever but over the first set and into the second set on Monday it was all Auger-Aliassime as he built a set and 3-1 lead before losing a bit of his edge. Then Nishioka began to make inroads on a suddenly more error-prone opponent. “He was playing perfect ‘til I break his serve (trailing 2-3 in the second set),” Nishioka said about Auger-Aliassime. “I was playing good but he’s just too good.”

“(Things) eventually turned his way,” Auger-Aliassime would later say about the momentum shift midway through the second set. “And I kind of had 30, 40 minutes where I lost my rhythm. I wasn’t sure what to do anymore. I tried to fight, stay in there. For sure it paid off – I felt I was close to winning. It’s tough to swallow but at the same time he deserved it.”

The crowd in Stadium 2 was solidly behind the 18-year-old Montrealer and it was treated to some spectacular tennis – with Auger Aliassime being brilliant with his impromptu bolts from the baseline for winners. But more unforced errors began to be mixed in as the match progressed.

“I’m going to always be like this unless I play a really aggressive player,” Auger-Aliassime said about his game-style. “I’m always dictating the points. I’m always making the winners, the mistakes. I think I did a lot of mistakes today caused by a bit of fatigue.”

The match seemed to have definitively turned Nishioka’s way when Auger-Aliassime became unhinged in the early part of the third set – leaking unforced errors particularly on his potent forehand. But he showed tremendous resolve to rally from 1-5 to 5-all – including saving three match points serving at 2-5.

Nishioka, a pleasant man who speaks good English, had some interesting insights into how things played out as Auger-aliassime climbed back from that 1-5 third-set deficit. “I was up 5-1, and then I can see he’s very tight,” Nishioka said. “But he started to be pretty aggressive again, like the first set. Then he doesn’t miss that much. He makes very good shots many times.

“And then I was a little bit nervous. So that’s the reason I think he’s coming back from 1-5 down. But I know he’s going to make mistakes as well. He can make a winner, but he’s going to miss, for sure.

“So I just try my best. I know he doesn’t like to hit the backhand, so try to hit many times to his backhand. I can see he wants to hit winner as soon as possible. I think maybe he’s tired, or, you know, he doesn’t want to hit many balls.

“I just try to hit many balls as I can. You know, I was waiting. He’s going to rush and make a mistake.”

The match was all about Auger-Aliassime either dominating with his aggression – 53 winners to 15 for Nishioka – or misfiring, usually off the forehand.

Still, he got to 6-all and appeared to be finally over the hump when he built a 5-3 lead in the eventual decisive tiebreak. But he then lost four points in a row – all on unforced errors – including a forehand that tipped the net and went long on Nishioka’s fourth match point.

Nishioka’s joy and relief at the moment of victory is evident in the picture here.

Maybe almost as remarkable as the two hours and 55 minutes of scintillating tennis were Auger-Aliassime’s thoughtful comments about the ultimate turnaround that saw Nishioka run off the final four consecutive points immediately after he himself had taken four in a row.

“That’s tennis, I guess,” he said philosophically. “You see all kinds of matches. I’m not the first guy to lose a match like this – not going to be the last guy for sure.
“But credit to him, because at 5-3, I hung in there. We had a tough rally, and he just stayed in there – so credit to him for that. And I didn’t serve bad from 5-4. I think he just played good points.”

Auger-Aliassime will move his ranking up to about No. 55, which is pretty remarkable when he was ranked No. 104 less than a month ago. “For sure, tonight was a tough one,” he said. “But if I look at the big picture, if you told me two months ago I’d be top 60, I’d be really happy with it.
“I’m going to take the positives from this tournament and try to move on.”

He plans to play the qualifying for next week’s Miami Open – but of course wouldn’t mind being given a wild card as was the case at the BNP Paribas Open. The Stadium 2 fans will not soon forget the fantastic ball-striking, rallies and intensity they saw from Auger-Aliassime and Nishioka.

One person unable to watch on Monday evening was World No. 1 women’s player Naomi Osaka of Japan. She was busy in nearby Stadium 1 defeating Danielle Collins 6-4, 6-2 in a third-round match. She later spoke with mostly Japanese reporters at her media conference.

“I opened Twitter and then I saw that it was, like, 7-6 in the third,” the 21-year-old Osaka said. “But then I heard that Nishioka was up 5-1 in the third. So I was like, ‘yo!’
“Which one (match) were you guys watching, actually? Both? Oh my God. Talent (smiling)!
“I heard that it was a really incredible match. I always knew that Nishioka is really good, can run down everything. It’s crazy. Can I call them kids? I’m going to call them kids. Sorry.
“But the kid he’s playing, the Canadian, I watched him play before, and I also thought he was really good. So I knew this match was going to be amazing. I’m kind of sad that I missed it.”

There are three Canadians on the schedule for Tuesday – Bianca Andreescu plays first at 11 a.m. (2 p.m. ET in Canada) against No. 18-ranked Wang Qiang in Stadium 4 and then Denis Shapovalov faces No. 11 Marin Cilic second up in Stadium 3. In doubles, the fifth seeds, Gabriela Dabrowski and Xu Yifan, will play their quarter-final at 2 p.m. (5 p.m. ET in Canada) versus Darija Jurak of Croatia and Raluca Olaru of Romania in Stadium 6. Sometimes it seems that the Coachella Valley/Palm Springs area is nothing but palm trees, cars and mountains – this picture is an illustration of just why that is.