The best player in NCAA tennis right now is Canadian: Liam Draxl on life playing in the NCAA 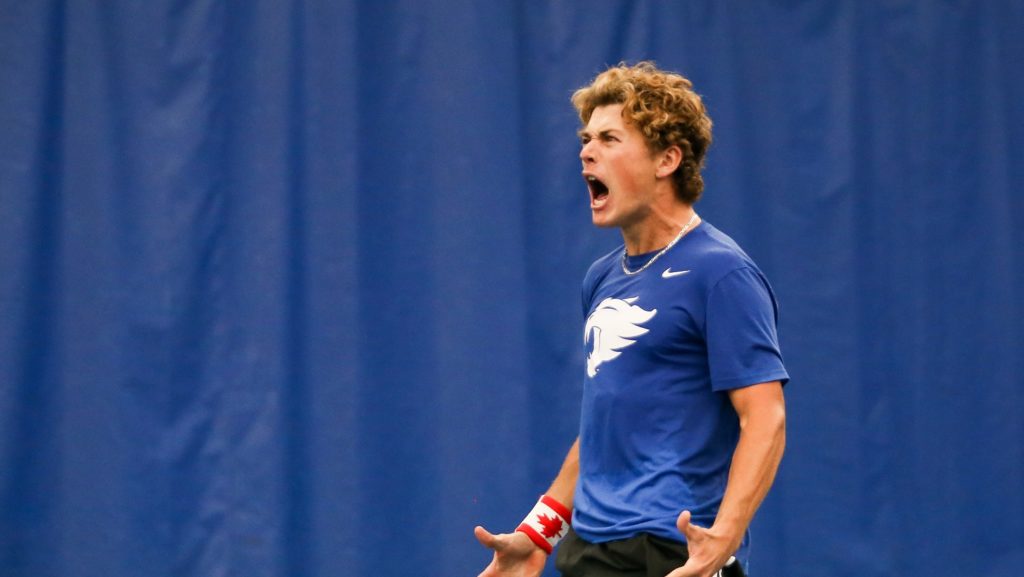 “It felt amazing to be honest,” Liam Draxl said when describing the biggest win of his college career so far – even through the phone, his smile undoubtedly beaming.

You may or may not have heard of the 19-year-old – but if you haven’t, you should really start taking notice.

Currently a sophomore at the University of Kentucky, the Wildcat – originally from Newmarket, Ontario – has his tail up and is making waves in the NCAA with a 10-0 record on the top singles court, including three wins over nationally ranked opponents.

One of those victories came in a blockbuster battle against the No. 1 player in college tennis, 25-year-old USC senior Daniel Cukierman, just a couple of weeks ago.

“It was a big win and I put so much importance on that match,” Draxl said, talking to Tennis Canada in a wide-ranging interview about life as a collegiate tennis player. “I really wanted to beat him and when I finally won the match point it meant a lot to me and it was a really emotional moment. It was just a really good feeling getting the ‘W’.”

The 6-3, 3-6, 6-3 triumph propelled Draxl to his second Southeastern Conference (SEC) Player of the Week award in just three cycles. His previous gong coming on February 3 following another top-10 win.

“It definitely gives me some confidence, knowing I can take out the top guy in college,” the teenager added. “It gives me confidence for all the other matches because they’re going to be ranked at least one spot under him.”

As for the accolades, Draxl is keeping his head level and feet on the ground: “I just go out there, take every match one at a time. If I keep winning, that recognition and those awards will fall into place.”

The wind may be in Draxl’s sails now, but that hasn’t always been the case in his short time at the University of Kentucky. In fact, the Canadian initially struggled to adapt to the atmosphere and pressure associated with college tennis.

“My first season as a Wildcat, I didn’t play my best tennis,” he said. “I struggled a little bit just getting used to that pressure. I think that’s the biggest thing you have to get used to in college tennis, is just the additional pressure that the team atmosphere has. It’s very loud and it’s pretty hectic at times. I feel like if you can play in a college tennis environment, you can play in any environment.”

All that changed, though, when Draxl notched a succession of pro-level wins last summer, including a 6-4, 4-6, [10-7] victory over this year’s surprise Australian Open semi-finalist Aslan Karatsev. He followed that up with a run of seven consecutive victories to scoop one of two qualifying wildcards into the 2021 Delray Beach Open by winning the first pre-qualifying “Survivor” tournament for the event.

Those successes truly laid the foundation for what has been an impressive season so far for the young Canadian, who puts it all down to a strong sense of self-belief.

“[The] summer set me up well for this following season. I played a bunch of matches down in Florida, I beat a bunch of good players – guys ranked in the top 300, 400 – and I got that match experience again. I really built my confidence up and going into my second season I know what to expect a little more.”

Draxl isn’t the only Canadian that’s making noise at the college level. In fact, he’s not even the only Canadian impressing at the University of Kentucky. The Wildcats boast a talent-filled roster containing five promising Canucks – Gabriel Diallo and Alexandre LeBlanc of Montreal, Joshua Lapadat from London, Jonathan Sorbo of Toronto and Draxl.

This Canadian contingent, Draxl says, have really helped make the city of Lexington feel like home away from home. “I knew all four of them pretty well before college and it was nice to have that factor where I already knew a couple of people and had a few friends before moving to Kentucky. It was a little more comforting.”

Looking ahead, Draxl is intent on turning pro once he graduates, with a degree in communications beckoning for the bright 19-year-old in just a few short years. Playing on the pro tour has always been a dream of his and watching Canada’s current crop of elite players succeed on the world’s biggest stage is providing all the motivation he needs: “It makes the young guys believe a little bit more. If Félix [Auger-Aliassime] and Denis [Shapovalov] can do it, why can’t I do it? And why can’t other people our age do it?”

And what better way to prepare for the pros than facing them in competitive action?

“Tennis Canada have taken really good care of me” Draxl said. “I’ve got multiple wildcards into challengers, which wouldn’t be possible without them. I’ve had a lot of great opportunities and it’s a really good experience. It’s great to have a couple of challenger matches in my young career already. So, I’m a little more ready to play my game when I play the next one. It’s inspiring.”

In the meantime, though, Draxl plans on enjoying his time in the NCAA – and he has a message for any young player considering the college route:

“I definitely think they should consider college. When I graduate, I’m going to be 21 and there’s so much time. I think the average age of the Top 100 is close to 30. You have so many years of your career left – it’s not all about when you’re 17, 18. I think unless you’re something very special, you should pick the college route. And I think you improve a lot as a tennis player, work on your game, especially when you have good coaches. But you can also improve off the court as a person.”