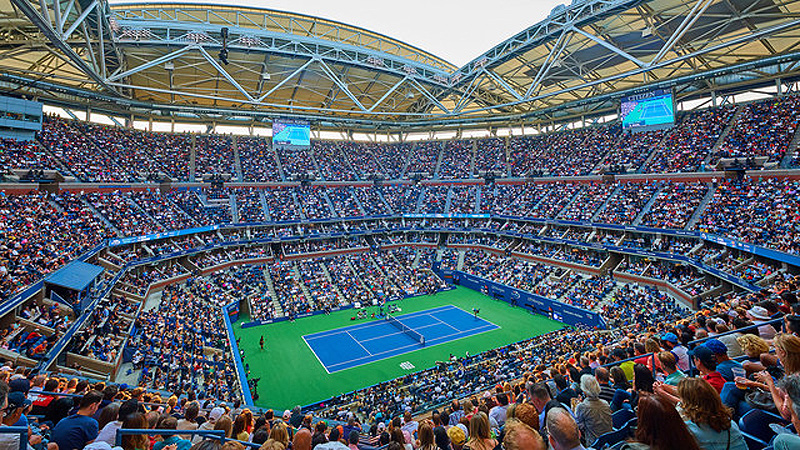 Grand Slam tournaments are grand by definition. And also because they’re often chock-full of twists, marvels, stats and highs.

The major that just came to a close in the Big Apple is no exception. Here are some of the moments and matches that caught my attention.

THE HEIR TAKES THE THRONE

I’m fascinated by this photo: comic book superhero Carlos Alcaraz expels a giant tennis ball to crush all the villains in his wake in one devastating blast.

That’s pretty much how things went down over the last two weeks and indeed all season.

The young man from El Palmar actually kicked off his climb to the apex of men’s tennis two years ago. Since then, he’s made steady meteoric progress and met the tremendous expectations that arose from his exceptional potential.

Let’s rewind to late August 2020, after the pandemic break, when Carlo Alcaraz, age 17 years and 3 months, was No.310. He reached the final of four of the five Challenger tournaments in which he competed, won two and never looked back.

The next 24 months look like a supersonic Everest expedition.

After his five-set loss to Alcaraz in the semis on September 9, Frances Tiafoe expressed what a lot of players were probably thinking: “I’ve never played a guy who’s moved as well as him. He’s a hell of a player, and he’s going to be a problem for a very long time.”

As if to rub salt in the wound (Frances’ and others’), Alcaraz’s countryman and coach, former Grand Slam champion Juan Carlos Ferrero, added this: “As I tell him, I think he’s on 60% of his game. He can improve a lot of things. He knows and I know that we have to keep working.”

I don’t know if he chose the right time to put that out there. Did he have to take it one step further when the tennis world was still stunned by Alcaraz’s prowess? Then again, if there’s anyone who knows Alcaraz and how far he can go, it’s Ferrero.

In conclusion, and in the interest of objectivity, let’s put the win into perspective by considering the many absentees.

For the first time in nearly two decades, there was no Nadal, Djokovic or Federer in the quarters. Rafa tried his hardest but his body couldn’t keep up, Novak isn’t vaccinated and Roger is still nursing his knees.

The former World No.2 Alexander Zverev is out with an ankle injury.

Who else was missing in action? No one.

The rest of the Top 25 were in all attendance, including the young talents who make up the elite. And that confirms how great Carlos Alcaraz really is.

The next gen we’ve heard so much about over the past five years has settled in the Top 10 and seems to like it there. It even put its youngest representative in command.

He may not have set a record like Michael Chang or Boris Becker, who won a Slam at 17, but we haven’t seen a player scurry up the rankings like Alcaraz in quite a while. With his extraordinary tennis sense and creativity, he could reign of a long, long time.

While we’re on the topic of Alcaraz and in case you missed it, here’s the point of the tournament—not owing to its length but rather to the amazing reflexes with which the new No.1 secured it after Jannik Sinner had foiled him by driving the ball behind him.

Aside from the occasional epic comeback, the match times are absurd for players, spectators, tournament organizers and broadcasters, and there are more drawbacks than benefits.

It’s as simple as that. And please don’t bring up tradition as a valid argument.

The most recent US Open only provided further evidence to support my opinion.

Fun for the record books but not fun for the thousands of ticket holders who have to get home, often using public transit, at a time when they may not feel especially safe on the streets. Not to mention the fact that fans, whether they watched from their stadium seats or their sofa at home, have a very short night and probably aren’t especially productive the next morning.

It’s also unfair to the player who gets a lot less rest than their opponent in the next round. In the semis last week, Frances Tiafoe wrapped up his quarterfinal a full ten hours before Alcaraz walked off the court. Despite the two-day break, the Spaniard was at a clear disadvantage.

And Tiafoe knew it. Before the Alcaraz–Sinner clash, he said: “I just hope they play a marathon match, a super-long match, and they get really tired come Friday.”

Apparently Alcaraz wasn’t worn out enough and proved his resilience against Tiafoe, who was buoyed by all the Americans who filled the over 22,000 seats at Arthur Ashe Stadium. As if to add to his legend, the Spaniard punched his ticket for the final after over four hours of fighting (4:22).

While the players’ performances are admirable, best-of-five matches constitute a real logistical problem for which there’s no simple solution.

It’s unacceptable for a player to go to bed when others are having breakfast. Because a match that ends at 2:50 a.m. is necessarily followed by some time in the locker room, a massage and/or ice bath for recovery, a sit-down with the media, a ride back to the hotel and a bite to eat.

Shouldn’t a night session feature only one men’s single match on the two main courts? That would mean depriving women’s tennis fans of their favourites after dinner—exactly what tournament organizers must avoid. Featuring only men’s matches during the day is unthinkable for the same reason.

The WTA and ATP will have to address this recurring problem of matches that start too late and end at ridiculous times. In 2018, Andy Murray had to forfeit his quarterfinal in Washington (against Alex de Minaur) because his previous match (against Marius Copil) ended at 3:01 a.m.

At the 2008 AO, Lleyton Hewitt spent 4 hours and 45 minutes dismantling Marcos Baghdatis in five sets after playing the first point at 11:48 p.m.

Need I remind you that Hewitt was expediently ejected in three by Novak Djokovic? The eventual champion secured the win while twiddling his thumbs and whistling a few Serbian tunes.

A consensus has emerged.

Since claiming the WTA throne after Ashleigh Barty’s departure, Iga Swiatek has proven she is indeed the rightful heir.

And she’s set her sights on a long reign.

When she surpassed Ons Jabeur 6-2, 7-6 (5) in the US Open final, the 21-year-old earned her third Slam crown and consolidated her position at the very top of the WTA rankings. Thus far, she’s collected over 10,000 points—more than No.2 Ons Jabeur and No.3 Anett Kontaveit combined.

Only two of her seven matches in NYC required three sets. Both times, she lost the first set and then made her rivals regret their presumptuousness.

In 14 tournaments, she’s competed in seven finals and won them all, including six straight titles between February 22 and June 4.

At Billie Jean King Cup last April, she dropped only one of the thirteen games she played against her two Romanian opponents.

We should all bow down in admiration.

To conclude, here’s the latest in the Separated at birth segment dedicated to tennis players who bear a resemblance to other notables.

It came to me on September 2, while I was watching Tommy Paul versus Casper Ruud.

On a shot of Paul, his laughing eyes and tiny smile under his nascent moustache reminded me of Canadian spaceship commander Chris Hadfield, who’s as charismatic as he is brilliant.

Because good things come in pairs, the two men also find commonalty in some of the late David Bowie’s most famous lyrics of all time: ground control.